Each time that I go to a spring, whether one that I have visited previously or one new to me, I have had a shift in perspective about Florida springs.  I had been to Wekiwa Springs before, but not while working, so I was looking at it with different eyes.  Wekiwa Springs is an urban spring; it is only about 5-10 minutes off of I-4 west of Altamonte and Longwood.  It is on the south end of a preserve that includes both its own state park land and Rock Springs Run Preserve. 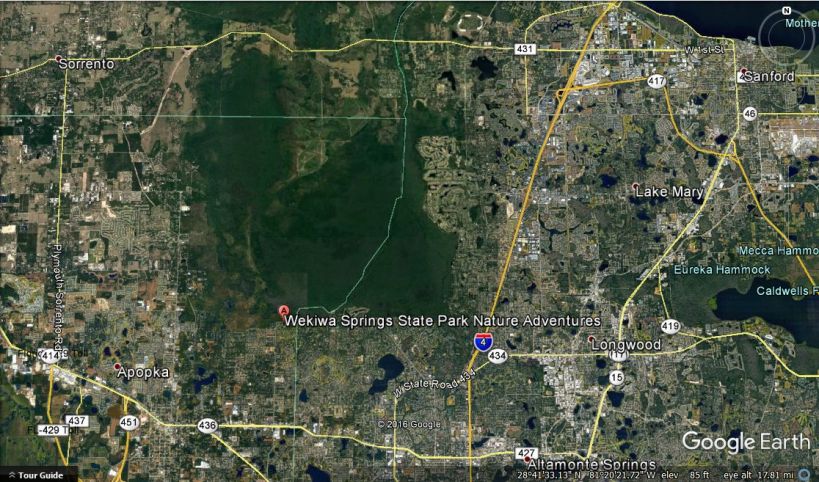 Map of landscape around Wekiwa Springs. Rock Spring starts about halfway up the west side of the green space.  Wekiwa Springs has a short run (less than 1 mile) and it is joined by the much longer Rock Springs (8.5 miles) to become the Wekiva River, which flows north to join the St. Johns River west of Debary.

The run begins with a springhead that was developed for swimming; the wall around the springhead is visible from the satellite photo on the left side of the photo. Looking (very) closely, Rock Spring run enters just before the slight curve to the north.  The large structure on the right of the photo is “Wekiva Island”.

The springhead is wide and sandy, with a rocky “boil” from which the water pours forth.  There also are a few rocks strewn around this swimming area; I was surprised to discover that one of these rocks was covered not just with algae, but hundreds of tiny fish.  Looking closely, some are golden or brownish; those fish are rainwater killifish (Lucania parva).  Mixed in are a few bluefin killifish (Lucania goodei), which have a black lateral stripe, and some mosquitofish (Gambusia holbrooki), which just appear silvery.  The silvery sheen on the rock is a coating of bubbles that indicate that the water is supersaturated with oxygen on the surface of the rock.  The algae are producing oxygen faster than the water can absorb it and the oxygen forms bubbles.  At this point, it is not clear whether the fish are attracted to the oxygen or invertebrates that are likely in the algae or a combination of both.  There also are fish attacking a blob of algae floating off to the right in the photo.

Interestingly, the headspring of Wekiwa is apparently rainwater killifish heaven.  I don’t think that I have ever seen quite so many in one place, although there are a lot at Volusia Blue Spring as well.  They seem to be attracted to wide sandy stretches of substrate with relatively little slope.

While swimming around, rainwater killifish can appear blotchy brown and tan if they are over a mottled substrate (like leaves or leaves and sand or algae) or they can appear almost white if they are over light sand only.  However, males turn a beautiful gold with red highlights on the fins when breeding.  Photo by Missy Gibbs.

Obviously, this species is a congener of the rainwater killifish and it has virtually the same shape and size, but a different color pattern and slightly different behavior.  Where rainwater killifish are typically benthic, bluefin killifish may be found on the substrate or midwater, swimming among plants and algae.  This species was once called redfin killifish and this photo would appear to support that name.  However, the fins of the males change color from the usual tan to red, blue, or red and blue (some individuals might have one color on the dorsal fin and another on the tail).  These fish do not change color like their congeners, the rainwaters.  Photo by Missy Gibbs.

The discharge of this spring is moderate (67 cfs on average according to SJRWMD on http://www.sjrwmd.com/springs/wekiwa.html) and it has what appeared to me to be a relatively concentration of small suspended material, creating a somewhat murky effect on the day that I visited.

The boil of Wekiwa Springs.

An algae covered log at the headspring.  The columns of algae remind me of a cityscape in outline.  Oxygen produced by photosynthesis gets trapped in the algae, causing it to pull the algae up into the column shape.  When the column gets tall enough, it becomes unstable and bits break off of the top, producing the floating material in the photo.

As the water leaves the headspring area, it passes under a bridge.  Perhaps the presence of the bridge has allowed accumulation of sand under it, but regardless of the cause, the water is a little shallower there and, as a result, fast moving (the increase in flow rate of water moving through a smaller cross-sectional area is called the Bernoulli effect).  It seemed as thought that staying in that spot required a lot of energy from the fish, so they must have been getting something from it.

After leaving the headspring, a short stretch of the run leads to “the pond”, which is a wider and deeper spot in the run.  At the start of the pond, I could see many tilapia (Oreochromis aureus) streaking out of their nests as I approached (I counted 28 from my video, although no doubt the number was much higher given the poor visibility and the small sample of the area).

The brown hole at the beginning of the video is likely one of last year’s tilapia nests.  The poof in the fluffy substrate is the first tilapia freaking out and taking off as I approach.  The sandy circles are current tilapia nests that are being guarded by the large silvery fish behind them (they move off the nests as I approach and come right back).  The fluffy substrate is silt produced from the breakdown of organic material, like algae.  Excuse the black cord running through the video; I didn’t realize that the camera’s leash had gone in front of the lens while I was paddling, alas.

There were also a lot of other fish at the upstream end of “the pond”, swimming among the spadderdock (Nuphar luteum) stems.

In the video, there are mosquitofish surfing at the surface and shiners (Notropis sp.) milling in the background.  A dollar sunfish (Lepomis marginatus) with pretty operculum rays (the shiny stripes on behind the eye) chases a spotted sunfish (Lepomis punctatus) into the frame.  Notice all the silt floating through the frame; it almost appears to be snowing.

The large fish that swim into this video are seminole killifish (Fundulus seminolis), the largest of the killifish in Florida (the only larger killifish is the aptly named Northern studfish, Fundulis catenatus)

The run narrows again after “the pond” and it is a lovely paddle down a tree-lined water hallway.  I was really enjoying the reflections of the trees on the water. 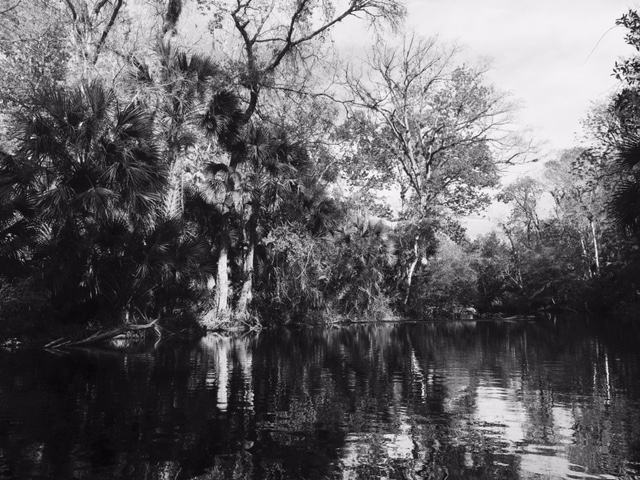 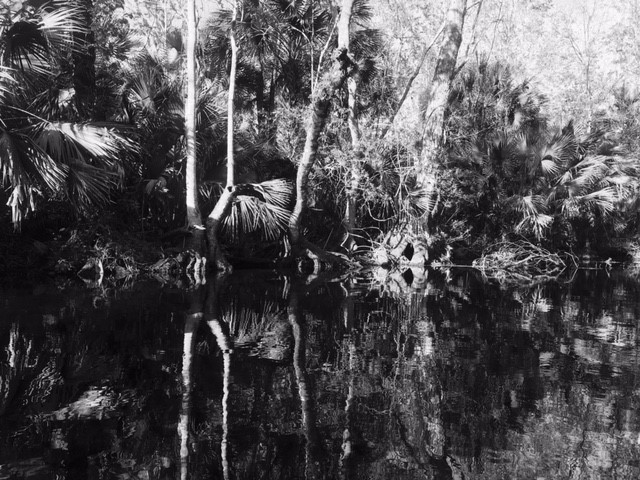 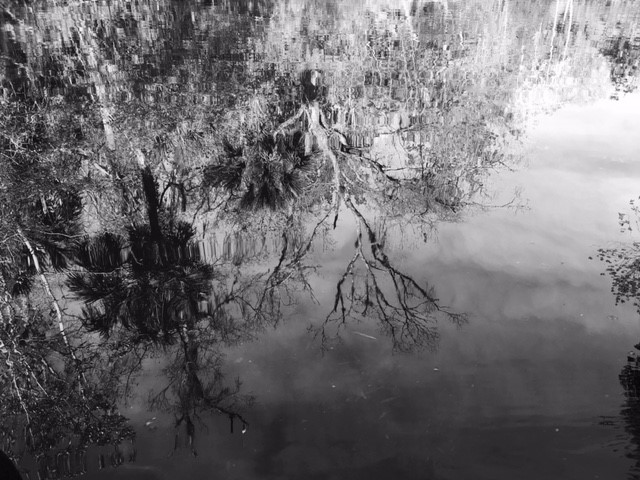 However, when I looked down into the water, the substrate was brown to a large degree, due to a combination of algae and silt.  Getting out of the boat was treacherous because I sank up to my knee in the silt. 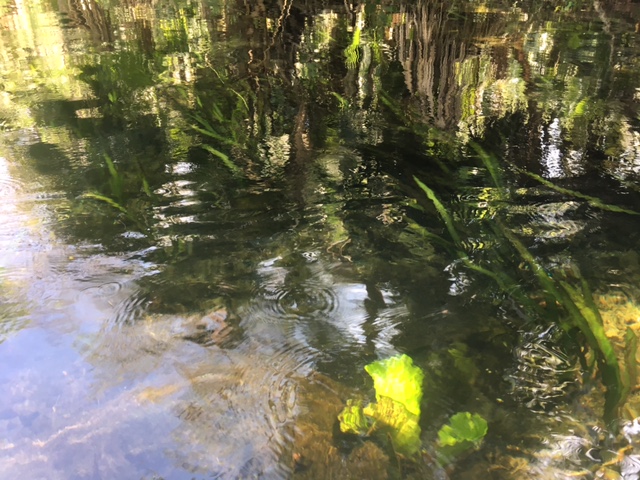 Healthy eelgrass (Vallinseria americana) and a large-leaved plant (still working on that one) poking out of the silt-covered substrate.  I took this photo downstream, near the confluence with Rock Spring run where water clarity cleared up a bit.  The eelgrass was much more covered in algae and silt upstream.  Interestingly, given how close the two springs are, Rock Spring run has a much higher oxygen concentration (~8 mg/L for Rock Spring vs. 4.5 mg/L for Wekiwa Spring just above the confluence of the two) and clearer substrate.

And, yet, there were fish.  Not as many as I had seen at Rainbow Springs, perhaps, and the bass that I did see looked a lot thinner than those at Rainbow Springs, but there were fish.  And, given the turbidity of the water, there were undoubtedly a lot more fish than I saw.  In fact, the average number of species (not individuals) that I observed per video was only slightly lower for Wekiwa than for Rainbow (4.0 vs. 4.3), although the composition of the assemblage was a little different.

Most of the fish in this video are some type of shiner; they look like ironcolor shiners (Notropis chalybaeus) to me, but I would have to hold one to be sure.  Occasionally, a bluefin killifish wanders into the frame.

There also were turtles, alligators, and lots of birds… 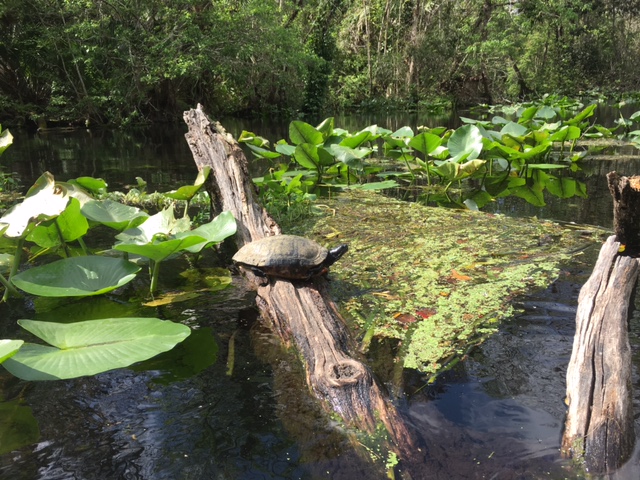 I saw many cooter-type turtles (Pseudomys sp.) basking along the run and, while waiting for my camera, I saw this snapping turtle (Chelydra serptentina) ambling along the bottom.  I also saw several loggerhead musk turtles (Sternotherus minor) up the headspring, although I managed to get no photos of them.  Alas, I also did not get a photo of the soft-shelled turtle (Apalone ferox) that had buried itself on the edge of the canoe launch (seems like a terrible place to bury oneself), although I did see it briefly when it came up for air.

I think that the alligator looks almost purple in this photo.