Rock Springs in the winter is my favorite of my local springs (don’t tell Volusia Blue that).  The water streams out of a cave into a narrow run filled with rocks (hence the name).

The cave that is the headspring of Rock Springs run.

The rocks just outside the cave. 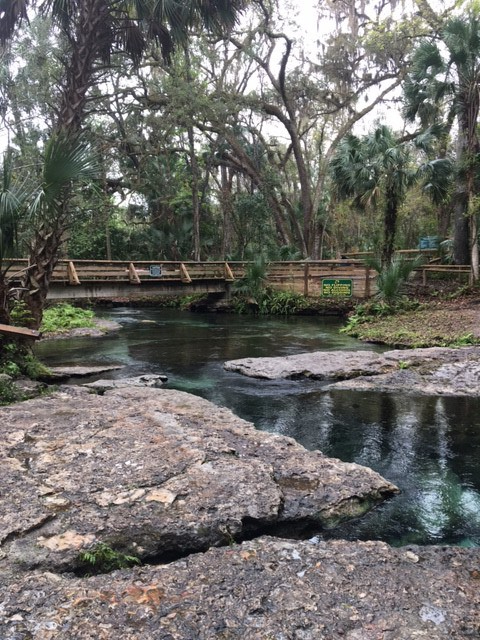 The start of the run. 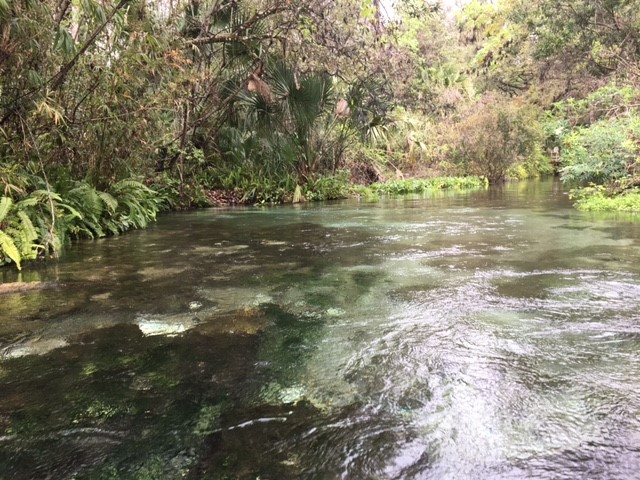 The rocks over which the water passes as it travels down the run.  These rocks are real shin-bruisers. 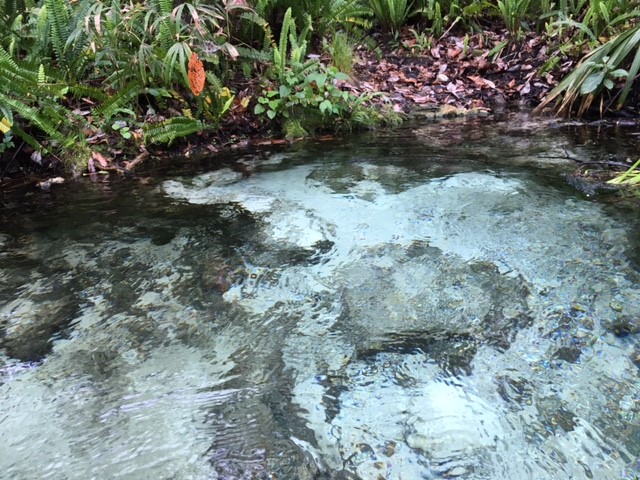 One of the many other small springs that contribute to Rock Springs flow.

Long ago, the run was widened about halfway down the park’s portion of the run (the total length of the run is ~8.5 miles long) to produce a pool for recreation. A small “beach” also was added for kids.

The “pool” of Kelly Park.  The slight disturbance in the water is an otter.

The run below the pool is very sandy (no rocks) with eelgrass lining either side of the main flow.  The vegetation on either bank is quite lush.

Rock Springs run below the pool.  The ramp where tubers and swimmers exit is visible on the right.

The run immediately downstream of the end of the park appears even more lush. 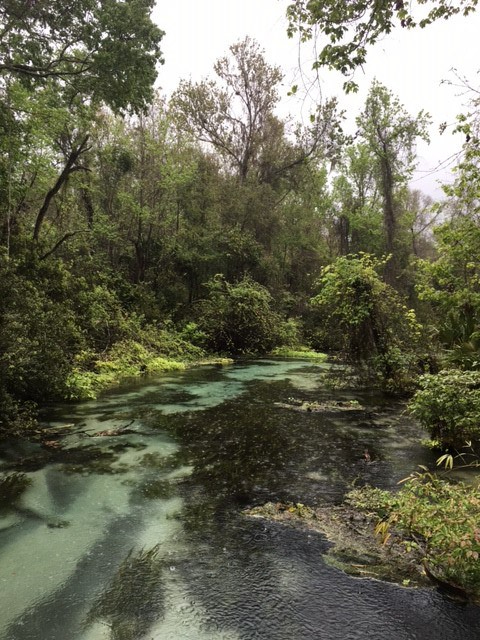 Rock Springs run below the park.

And, yes, it was raining (and that is my camera on its tripod recording fish).

This trip was particularly fun because I had the company of three otters (and virtually no people again).  The otters were roaming, hunting, and periodically calling out to each other.

These two otters were chirping to each other on the edge of the pool.  They were swimming all around the pool and I didn’t realize that I captured one on video until I downloaded it.

An otter swimming through the pool.

In this clip, the otter scares some sunfish into view before it swims through itself.  It is carrying a fish in its mouth.

The otter in this clip is the same otter (I think) coming back through the same area.  It snuffled through the sediment on its way through, probably looking for invertebrates (maybe crayfish?).

Probably the main reason that Rock Springs is my favorite in the area is the beauty of cave and run and the narrowness of the run, which makes the flow quite fast.  The discharge is much lower (mean =  57 cfs) than a first magnitude spring, like Blue Spring (historic mean = 157 cfs), but the flow is faster because the water is forced through a smaller cross-sectional area (this phenomenon is called the Bernoulli effect).

However, I also love this spring because (if you ignore the pool area) it appears to be quite pristine.  Interestingly, it appears much more pristine than its sister spring, Wekiwa Spring, which is in a more densely developed area, yet still relatively close as the crow flies.

Despite my preconception of it as a relatively pristine spring, Rock Springs is not low nutrient.  Its nitrate concentration (mean = 1400 microg/L) positions it in the upper range of mesotrophic (moderate nutrient) or the lower range of eutrophic (high nutrient), whereas it phosphate concentration (80 microg/L) plants it firmly in the range of eutrophic.  Wekiwa Springs, on the other hand, has very slightly lower nitrate concentration (1200 microg/L) and higher phosphate concentration (140 microg/L).  Dissolved oxygen at Rock Springs was slightly lower than Wekiwa Springs at most stations at which I measured it (I tried to select comparable distances downstream for each station).  And, yet, Wekiwa Springs had loads of sediment and Rock Springs did not.  In areas with nitrate enrichment, phosphorus often is a limiting nutrient, so the ratio of the two nutrients is important.  Perhaps the lower ratio at Wekiwa (relatively more phosphorus than at Rock) is the culprit for the loads of sediment, but I am not so sure that it is that simple.

Given the abundant eelgrass and my memory of sampling Rock Springs by seine around 2000, I expected lots of small fish.  I definitely captured fish in my videos, but not as many as I expected.  However, I did capture some that I did not expect, like the shad in the video below (probably Dorosoma petenense), and a brook silverside (Labidesthes sicculus) in breeding color (not a good video, alas).

A shad cruising through the pool.

Spotted (Lepomis punctatus) and redbreast (Lepomis auritus) sunfish checking out the camera.  (Guess which ones are the redbreast)

I also saw some nice turtles, like these two that look like they are facing of  (but undoubtedly are not ). 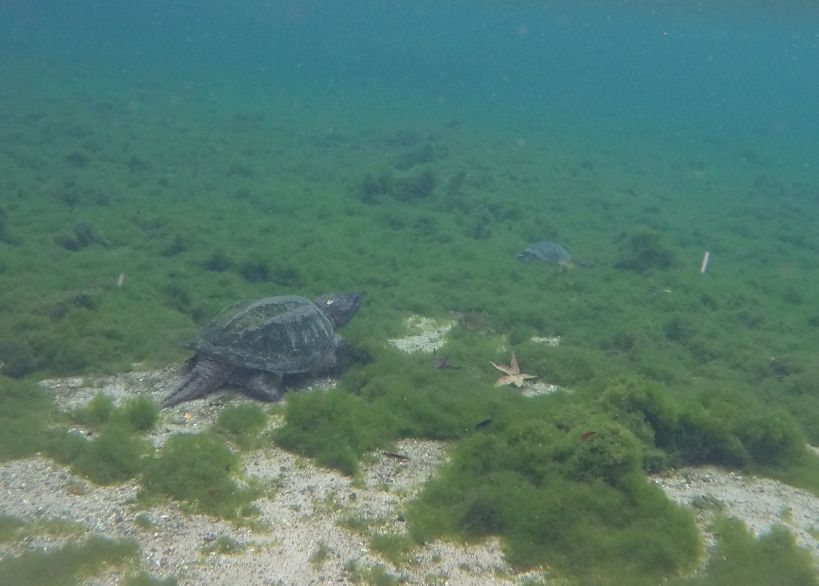 A snapping turtle (Chelydra serpentina) and a cooter of some sort (Pseudemys sp.) in the pool.