This photo depicts part of the headspring of Fanning Springs (apparently, I didn’t take a vista shot!).  Although this photo only shows part of the boil, it gives an indication of the steep drop to the bottom of the vent.

This underwater shot of the headspring also gives an indication of scale; there are four grey snapper (Lutjanus griseus) circling the vent in the center of the photo.

Fanning Springs also has a little side spring that enters the very, very short run about halfway to the Suwannee River (apparently, the main spring is “Big Fanning”).

A second spring that contributes to Fanning Springs; the main spring is visible in the background of the photo.

Unlike Manatee Springs, however, the plume of freshwater into the Suwannee River is much smaller, presumably due to the much lower discharge (87 cfs in Fanning vs. 148 cfs in Manatee, according to USGS, https://waterdata.usgs.gov/usa/nwis/uv?site_no=02323502).  The river also did not seem as massive at Fanning Springs, even though I was only a relatively small distance upstream from Manatee Springs.

The Suwannee River at the point where Fanning Springs enters.

Fanning Springs, like Manatee Springs, had a substantial biomass of algae when I visited it, although the algae appeared much less thick at Fanning than at Manatee.  Interestingly, Fanning Springs appeared to be even more in the thick of agriculture than Manatee Springs, although I don’t know the flow of groundwater beneath these two springs.  In 2004, Fanning Springs had nutrient concentrations that reflected this type of land use (nitrate = 3.7 mg/L and phosphate = 0.07 mg/L, Scott et al. 2004, “Springs of Florida”, FGS Bulletin 66).  By 2010, apparently the nitrate concentrations were even higher; Harrington et al. (2010) reported a nitrate concentration of 5.2 mg/L for Fanning Springs in the “Florida Springs Initiative Monitoring Network Report and Recognized Sources of Nitrate” published by Florida Department of Environmental Protection.  This report also indicated that the source of the nutrient enrichment was a combination of fertilizer from row crops and animal waste. 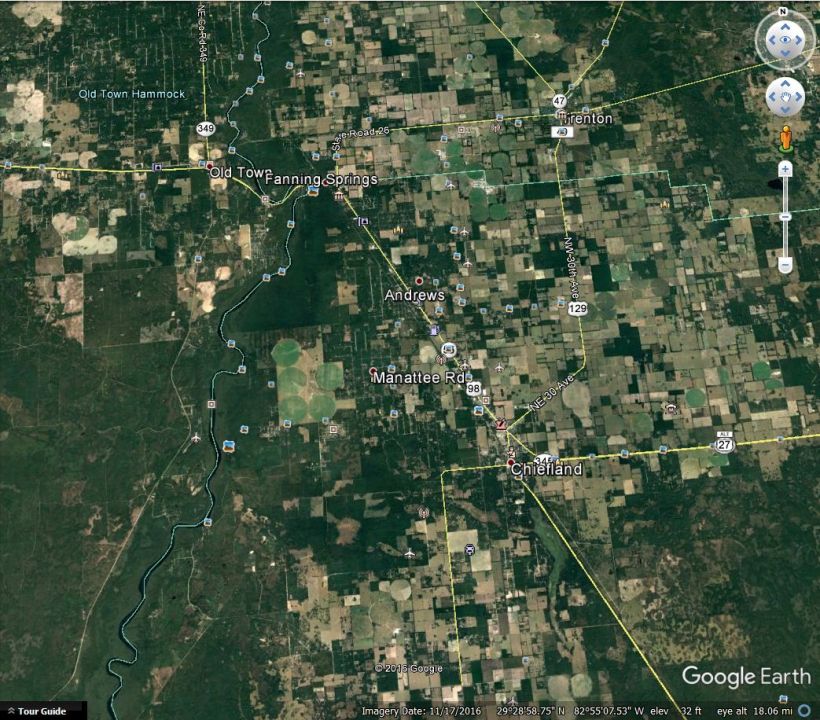 The long, windy path had several turns with narrower radii than my kayak and, yes, I actually went under that bridge…

Like Manatee Springs, Fanning Springs had a lot of bluefin killifish (Lucania goodei), shiners (Notropis sp.), and bowfin (Amia calva), but it also had my two most exciting find of the project so far (at least if you’re a biology nerd)…

A pygmy sunfish in breeding color (Elassoma sp.).  He really seems to “like” the camera.

A pair of mating swamp darters (Etheostoma fusiforme).  In the longer video, after they mate, a bunch of shiners (Notropis sp.) swoop in and appear to be eating the eggs out of that patch of algae.

For anyone who likes little turtles, I also caught this little loggerhead musk turtle (Sternotherus minor) on the edge of the headspring: