Hornsby Spring (near High Springs on the Santa Fe) was one of the most unusual springs that I visited, although I am afraid that I might have missed the best part (more on that later).  The spring was not originally on my list of springs to visit, but the Director of Camp Kalaqua, which surrounds the spring, graciously allowed me access to the spring on short notice.

The headspring of Hornsby Spring.  The large jumping pillow is on the right side of the vent.

I decided to visit it after one of my colleagues told me that I should see it because of its unusual history.  Even now, I do not know the full story of the spring, but Craig Pittman, the springs’ advocate and outspoken Tampa Bay Times reporter, mentioned Hornsby Spring at the outset of his 2012 article on vanishing springs (http://www.tampabay.com/news/environment/water/floridas-vanishing-springs/1262988).  According to the article, people flocked to the spring in the 1950s to dive down into its 80 foot-deep boil.  However, in the 2000s the flow declined until it stopped flowing, the water level dropped until the boil was only 50 feet deep, and the camp built a water park to give the campers an alternative swimming spot.  As I drove through the well-kept and extensive camp, I was expecting no flow, no fish, no snails.  Once I got there, however, there was flow, albeit low.  I downloaded SRWMD data on historical flow for Hornsby to get a better picture of its flow history: 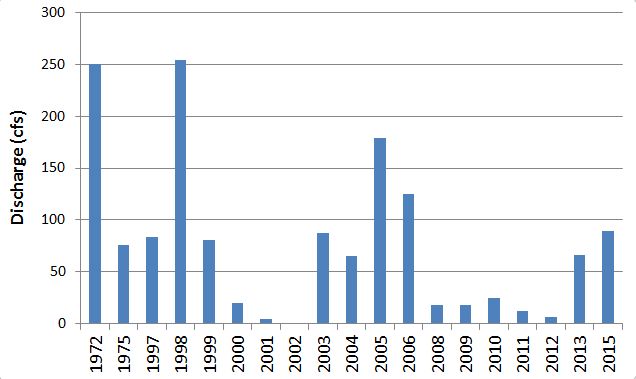 The discharge history of Hornsby Spring.  The discharge has been highly variable even as far back as the 1970s, but the spring stopped flowing for extended periods in 2001, 2002, and 2012.

The entire vent area of the spring was blanketed with algae, much of it dead and decaying so that it came apart in my hands.  I did not notice a boil, which would be obvious at a discharge of 250 cfs for that size of a vent (250 cfs is higher than any of the springs that I visited with the exception of Rainbow Springs).  Although the nitrate concentration was only 0.51 mg/L the last time that it was measured by SRWMD (http://www.mysuwanneeriver.org/portal/springs.htm) in January 2017, which fairly low, the phosphate concentration was 0.07 mg/L, which is a pretty high.  The high phosphate may be the culprit in the algal accumulation.

The Hornsby headspring.  It was overcast that day and the combination of no direct sunlight and algal coverage made the vent inscrutable from above.  It is a bit clearer on the underwater footage.  This spring also looked like a good candidate for a sea monster coming out of the depths.

Dead algae on the edge of the headspring. When I tried to pick some up, it came apart in my hand.

An algal mat just below the headspring.  This algae also looked dead, but I did not try to pick it up.

However, once I left the headspring, the run was shallow and the water velocity was appreciable.  When a volume of water is forced through a smaller cross-sectional area (like moving from a deep headspring to a shallow run), the velocity of the water increases.  And, although there was a lot of algae downstream as well, a significant proportion (much more than I expected) of the spring run substrate was covered with native plants waving in the flow instead of algae.  Oddly, this spring is one of the only springs at which I have seen this plant (possibly Potamogeton) and it was all over the place.

Plants in the Hornsby Spring run.

Perhaps my introduction would suggest that I did not enjoy my trip to Hornsby and, in truth, I did not really expect to enjoy it.  However, the spring run has a stark beauty.  I tend to gravitate to narrow runs with a lot of tree cover and Hornsby Spring has both of those characteristics.  The spring is lined with cypress trees and it is lovely. 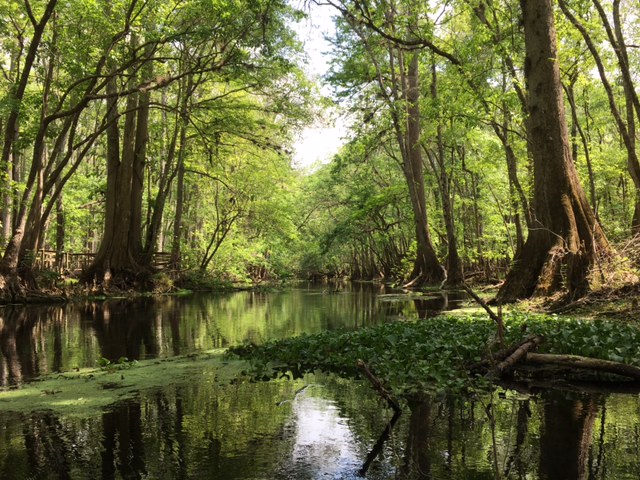 The Hornsby run.  I was not expecting the beauty of this run.

Ah, but why did I call it stark beauty?  The photo above just looks beautiful.  However, a closer look at the trees reveals that the bases of the cypress trees were somewhat disfigured and many were leaning awkwardly.  There also were a surprising number of downed trees, not as evident in this particular photo. 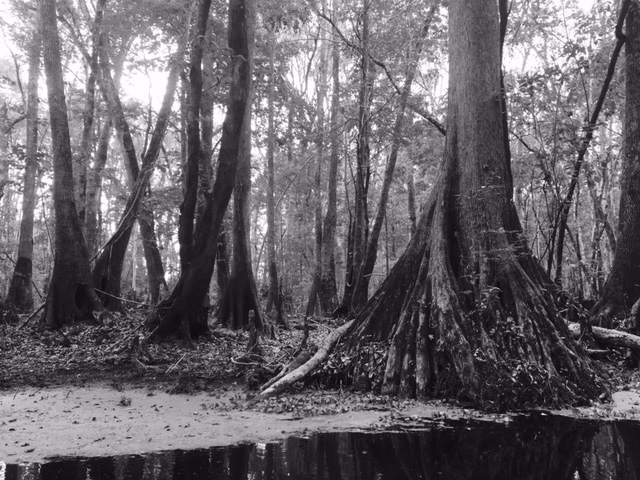 The knobby base of a cypress tree with its leaning partners.  Many trees along the banks were leaning or had fallen over (more than other, similar springs?). 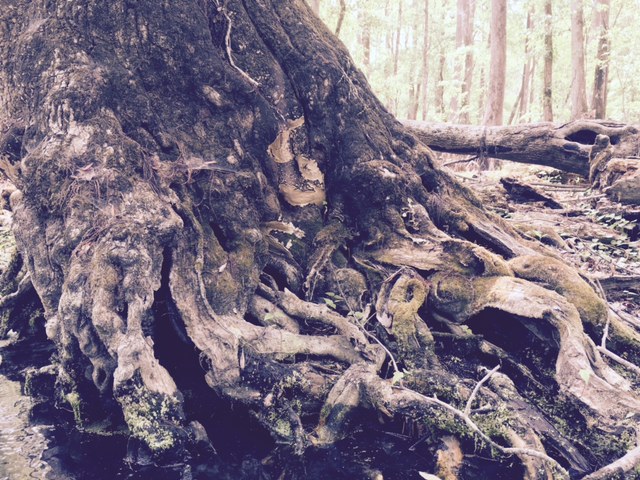 A close up of the irregular surface of the base of a cypress tree.

The roots of this tree were rotted and I could see through it.

I floated downstream in this somewhat ghostly-feeling run (due to all the leaning and downed trees) until I reached this fallen tree house.  Strangely, I was thinking of childrens’ stories as I floated.  The knobby and rotted cypress trees made me think of a forest of elves from the Lord of the Rings.  This fallen tree house made me think of Robinson Crusoe or some weird Peter Pan.

A fallen tree house about half or 1/3 of the way down the run.

Alas, just on the other side of this tree house, which was on a little island that divided the flow in the run, there was a float line (the type used to designate swimming areas).  Exotic water hyacinth had built up along this line and I could not get my kayak through it, try as I might.  I considered portaging around the blockage because a) I wanted to get to the Santa Fe and b) I am just that compulsive, but when I climbed out and walked around the blockage on land, it was peppered with cypress knees and I decided that it would be a miserable portage.  Oddly, most of the cypress knees that I stepped on by accident bent under my feet, further contributing to my feeling that I was in a ghost forest.  Instead, I thought that I could go out to the Santa Fe and paddle upstream to the blockage so that, in that way, I could see the whole run.

When I turned around to do my tripod filming, I discovered that, indeed, there were fish.  There were a lot of largemouth bass (Micropterus salmoides) and sunfish (Lepomis sp.) around debris from the tree house at the blockage.  On the other bank, there were loads of mosquitofish (Gambusia holbrooki), sailfin mollies (Poecilia reticulata), and bluefin killifish (Lucania goodei).

Bass and sunfish around debris from the collapsed tree house.

Small fish on the bank opposite the collapsed tree house.  The float line clogged with water hyacinth obstructed the surface flow producing eddies in the trapped water.

And, while waiting for my camera, I also discovered that there were loads of tiny snails in the run. 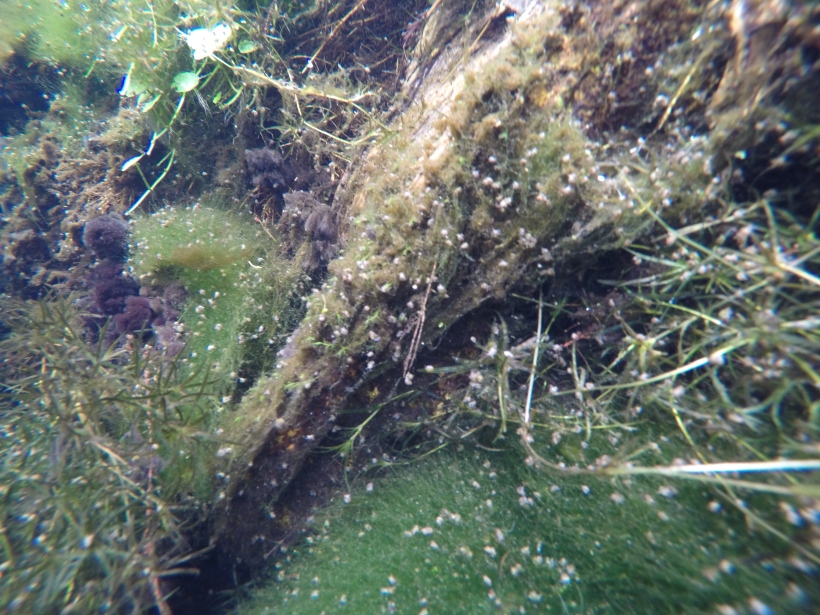 Once I finished my filming, at least as far as I was able to go with the obstruction, I went back to the camp office and spoke with the very helpful security guard.  In the course of a conversation about whether there was a boat ramp that would let me access the spring from the river without a day-long paddle, he told me that Hornsby Spring has a whirlpool just downstream of where I was stopped by the water hyacinth.  The prospect of a whirlpool really cemented my desire to see the rest of the run, so I drove down the road and put in on the Santa Fe River.  I paddled upstream for an hour, both into the current and into the wind, but alas, the most that I found were two impassable beds.  I suspected that one of the two non-flowing outflows was Hornsby Spring.  Perhaps all of the discharge went down the whirlpool…  Sigh.  At least it only took my half an hour to get back.

Perhaps the outflow location of Hornsby Spring on the Santa Fe River.  I so wanted to find that whirlpool…