I think that at the end of it all, Troy Spring might be one of the most memorable springs that I will have visited.  The spring did not have particularly high discharge, nor did it have many fish, but it had a truly massive vent and tons of turtles.  It was very cold (for Florida) the morning that I showed up to sample Troy, so it was just me, the giant hole, and the turtles.  As I paddled around the giant hole and startled turtles from their resting places on the edge, it looked like they were swimming off into space. 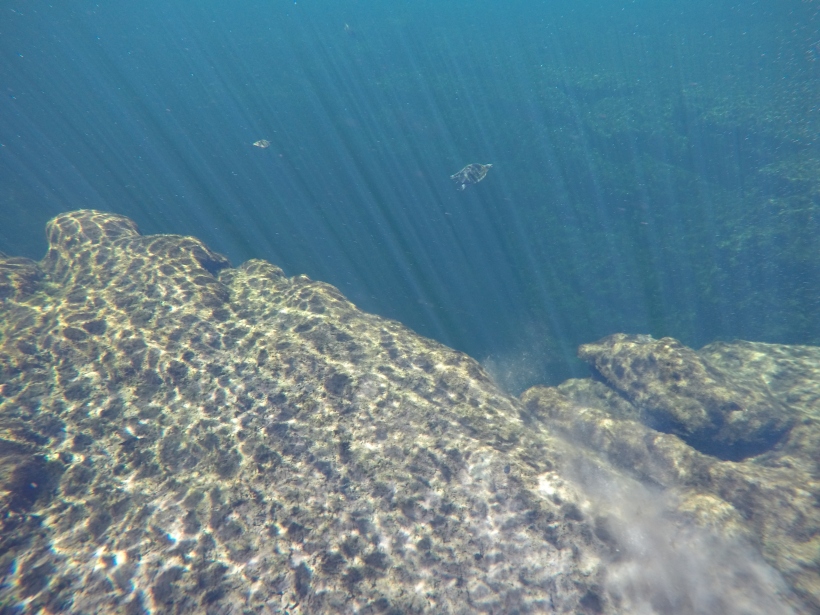 Turtles swimming off into the giant hole that is the vent of Troy Spring.  If there ever was a spring with a giant sea monster in it, it would probably be Troy.

I think that part of the reason that the giant vent was so startling was that the run was shallow and exceedingly short.  I really did not do it justice in the photos that I took that day because I was just so mesmerized by how big the vent was.  Paddling around the edge of vent, it appeared that it went down forever (it is 70 feet deep).

The edge of the vent (I am almost on land the spot where I took the photo) looking down toward the Suwannee River.  The float line represents the border between the run and the river.

I had expected that its discharge would be really high because the vent seemed so massive, but in actuality, the discharge may have been a little over 100 cfs.  The Springs of Florida (Scott et al. 2004) reported a high discharge of 202 cfs in 1973, but a low of 106 cfs in 2001.  SRWMD data from 2014 ranged from about 100 to about 170 cfs.  Thinking back, I suppose that this discharge should not be surprising because the plume from the spring did not penetrate into the river very far.  With most Florida springs, the plumes are quite easy to see because a) the river water is so stained with tannic acid and b) the river water and the spring water do not mix easily.  There is typically a density difference between the spring water and the river water, either due to a temperature difference, a difference in dissolved salts, or more often both.

The edge of the Troy Spring plume, with tannic Suwannee River water on the left side of the photo and clear spring water on the right side.

Troy Spring definitely had algae growing on its rocks and sand, but not in the abundance that I might have expected given its nutrient concentrations.  USGS reports that in the week of 17-24 April 2017, Troy Spring nitrate concentration ranged from 2.05 to 2.40 mg/L (https://waterdata.usgs.gov/fl/nwis/uv?site_no=02320250).  These concentrations are about 2-4 times the concentrations of Volusia Blue Spring and well into the eutrophic zone for freshwater.  Springs of Florida (Scott et al. 2004) and SRWMD (http://www.mysuwanneeriver.org/portal/springs.htm) reported similar concentrations of nitrate, but only 0.02-0.03 mg/L of phosphate, which is low.  Unlike the nitrate concentration, the phosphate concentration would put the spring in the oligotrophic range (the lowest nutrient category).  As I have mentioned in previous posts, the ratio of nitrate to phosphate is as important as the absolute values of the nutrients and phosphate can be a limiting nutrient, keeping algal growth low. 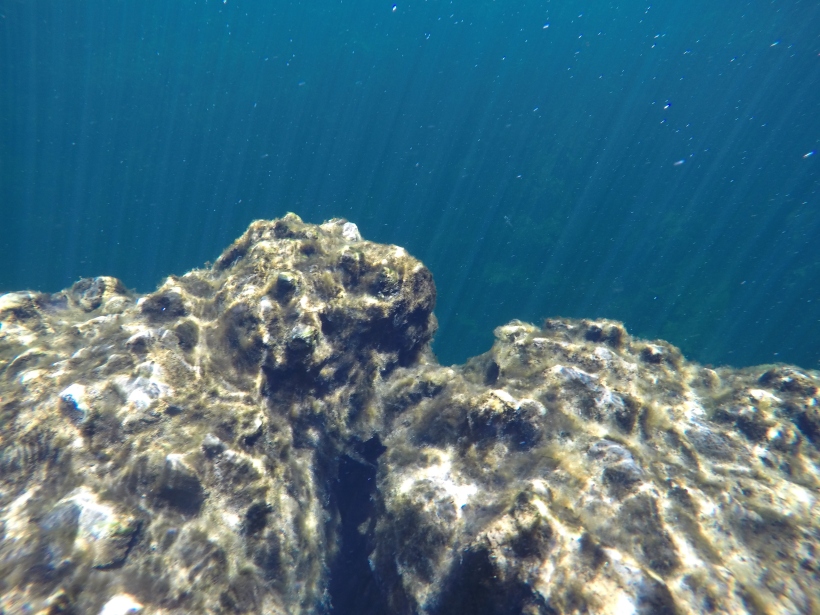 Algae growing on the rocks at the edge of the vent.

Troy Spring sits in a corridor of green along the Suwannee River, nestled between agricultural and silvacultural (tree farming) land, so high nutrient concentrations are not surprising.   However, a large area of preserved land sits to the west of the river; it would be interesting to know the direction of flow of the water in the aquifer in vicinity of Troy Spring.  I suspect that the flow is not coming from far enough west to originate in the preserve area.

Other than the giant hole, the substrate diversity of Troy Spring was one of the lowest that I have found so far (although it was somewhat similar to the springs in Ginnie Springs park).  I usually try to put the cameras in areas with some vegetation or other structure and I had a hard time finding good spots in Troy as most of the bottom, even up to the bank, was just sand or clay.

One of the few areas in the run that had some structure.

Undoubtedly because of the low structural complexity of the run, I recorded very few fish along the banks of the run or in the middle of the run.  In the end, I only recorded two species, on average, for each video that I took.  However, there were a bunch of fish right on the edge of the plume.  I was really hoping for (although not expecting) a sturgeon, but it was mostly mullet (Mugil cephalus) and spotted suckers (Minytrema melanops), alas.

Suckers, mullet, and a gar that I scared back into the Suwannee River as I paddled past (they came right back because I scared them in again a little while later).

Perhaps the morphology of the spring is part of the low diversity and density of fish in the spring; it was kind of like a shallow bathtub with a giant drain at one end.  With such a short run, small fish would be very exposed to predators–but this is just a hypothesis.

As I floated in the run, waiting for my cameras, two guys who were camping their way up the Suwannee River paddled up to view the spring.  They were jealous that I was on the other side of the float line; I was jealous of their river adventure.  The Suwannee is big and bold near Troy Spring.  Perhaps because it was March before all the trees had leafed out, the river at that point almost didn’t look like Florida to me, with its exposed sand banks and slightly bare trees.  At a glance, I almost felt like I was back in Oklahoma or somewhere similarly arid.

The float line demarcating the border between Troy Spring and the Suwannee River (looking toward the Suwannee).