When I visited Silver Glen Springs this past spring, I had not been there in a couple of years, I think, and I had forgotten the gorgeous blue of the headspring.  It was truly stunning. 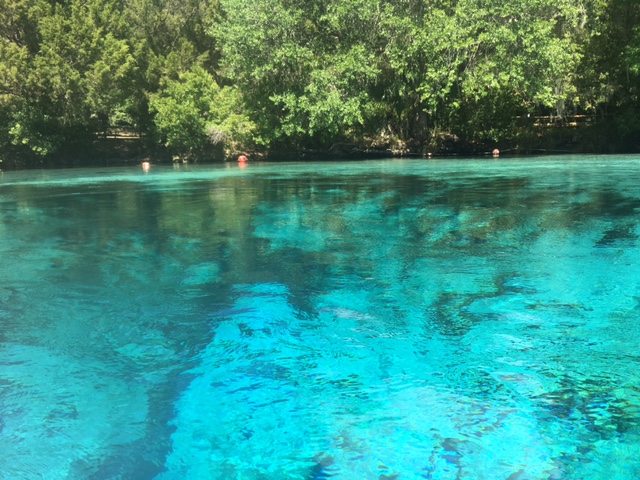 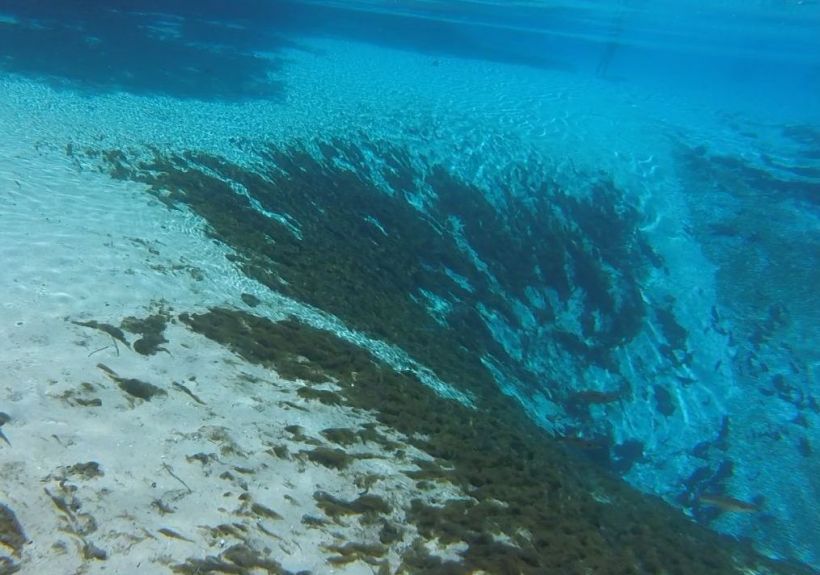 The giant shoal of sunshine bass (Morone chrysops x saxatilis) in the main vent and the smaller shoal of sunshine and striped bass (Morone saxatilis) in the vent on the side of the headspring (in the roped off conservation area) also were magnificent.  These fish are thought to use the spring as a cool water refuge during warm periods (Jay Holder, FWC).  They do not congregate in other springs, some of which have oxygen concentrations too low to support them, so this boiling mass of fish is unique. 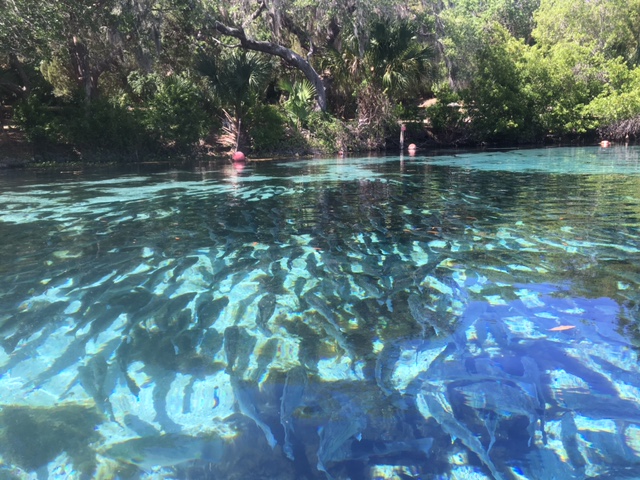 The shoal of sunshine bass from the surface. 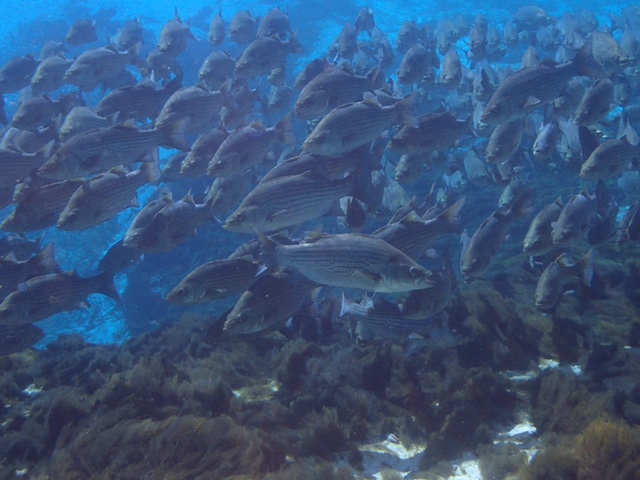 The same shoal under water.  I have been told to ID sunshine bass by the broken line of dots that make up the stripes down their sides, among other characters. 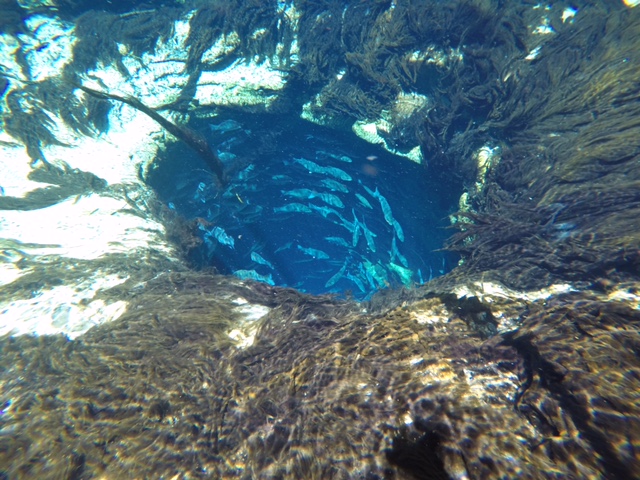 The shoal of bass (probably sunshine and striped) in the side vent.

Up until mid-April, the only St. Johns River springs that I had visited were Wekiwa and Rock Spring, both of which have fairly high nitrate concentrations, and Volusia Blue Spring, but all three of these springs are closer to dense human populations than the Ocala Springs.  With this trip to Silver Glen, I began to contemplate the Ocala Springs and to have a wider view of St. Johns River springs generally.  Silver Glen Springs is smack in the middle of a large conservation area, the Ocala National Forest, and probably as a result, it has the lowest nitrate concentration of any spring that I visited (0.05 mg/L, http://www.sjrwmd.com/springs/silverglen.html).  By contrast, the Suwannee River springs ranged from 1.0-5.7 mg/L; the highest concentration, in Fanning Springs, was clearly two orders of magnitude higher than Silver Glen.

The low nitrate (and phosphate) concentrations are a little misleading, however, in the context of human impact on the spring.  The run of Silver Glen is very short and somewhat wide and it flows into Lake George.  Boaters regularly come up the spring from the lake and anchor in the middle of the run (and sit on lawn chairs in the water), producing a white sand streak down its center just below the headspring. 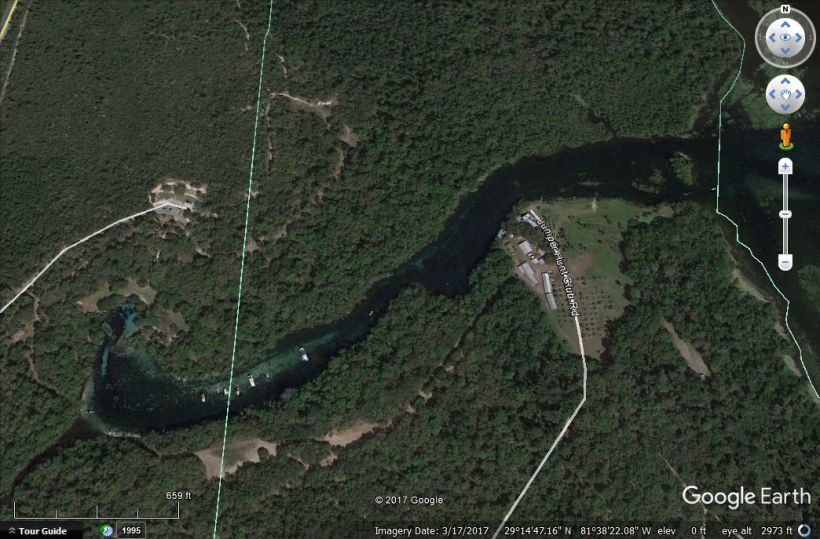 The Silver Glen Springs run.  The headspring is on the left side of the image and the confluence of the spring with Lake George is on the right side.  The light area with boats anchored is bare sand; most of the rest of the run is covered with eelgrass (Valisneria americana) or Sagittaria kurziana. 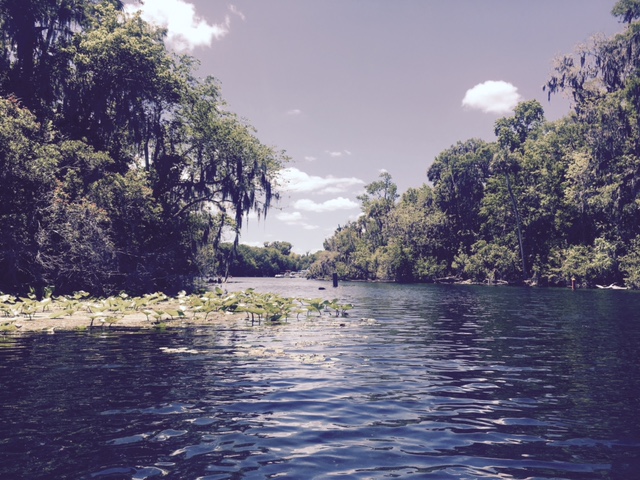 Silver Glen run looking up at the headspring.  Several anchored boats are visible in the distance. 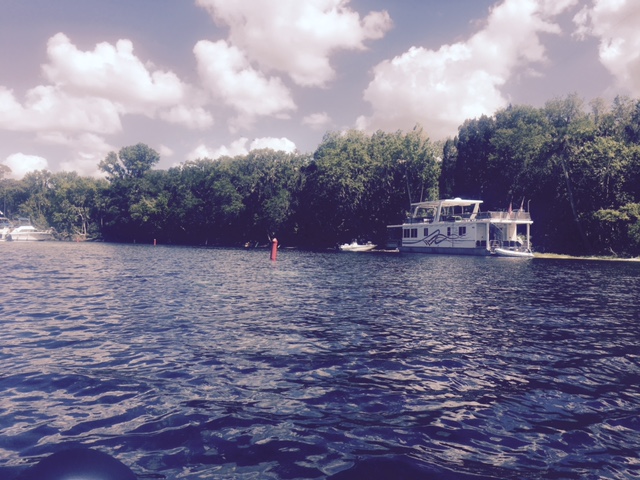 A large pontoon boat with two skiffs anchored near shore. 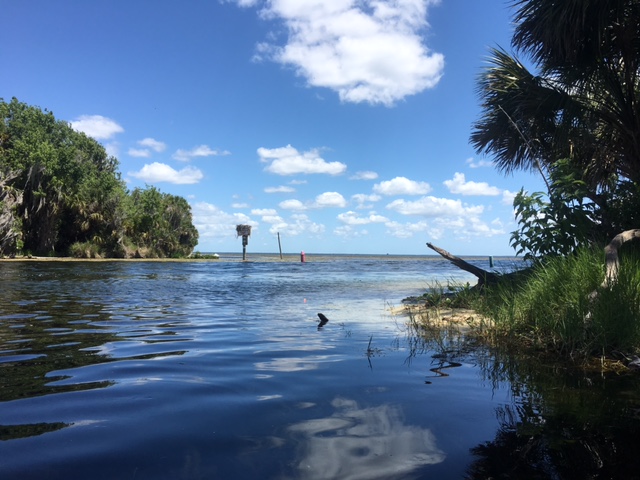 The entrance of Silver Glen Springs into Lake George.

Despite the good coverage of plants over much of the run, I was surprised by the density of algae at the headspring and the blanket of algae on the plants in the run. 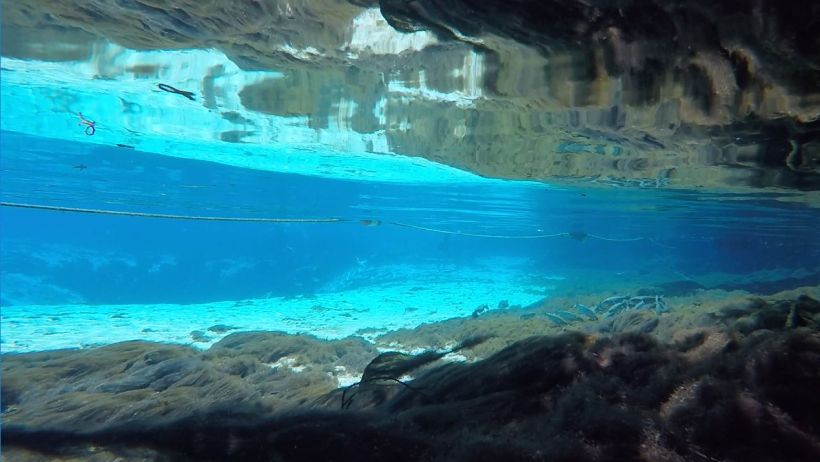 The headspring of Silver Glen was ringed by algae.  In the photo, there are swimmers in the background, free diving into the vent, and striped mullet (Mugil cephalus) feeding in the algae on the right side of the photo. 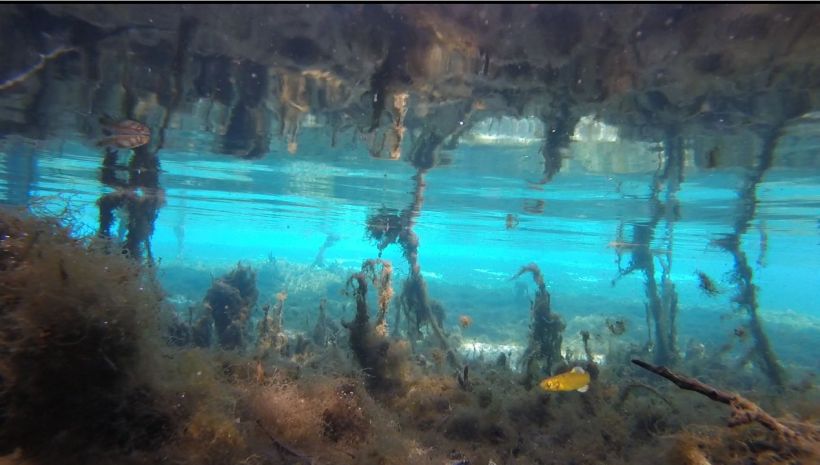 The algae was just as thick on the opposite side of the headspring; a lovely little male rainwater killifish (Lucania parva) stood out nicely against the algae.

Floating down Silver Glen run.  The plants look fuzzy because they were covered in algae.  The water clarity was not particularly high either, so the striped mullet in the background are hazy in the video.

The substrate near the bank was covered with material; someone suggested to me recently that it might be mineral, but it looks organic to me.  If you look at the video, the whole bottom is gently moving the entire time.  I am not sure what a thick layer of moving material does to fish; it might be disruptive or it might provide lots of invertebrates to eat.  There’s a question.

Shifting substrate along the bank of Silver Glen run.  The spotted sunfish (Lepomis punctatus) and bluegill (Lepomis macrochirus) in the area do not look distressed…

In the end, the total number of large fish that I observed in the middle of the run was the highest of any of the springs that I surveyed, due primarily to a million striped mullet (not literally).  The diversity also was fairly high, but the number of smaller fish near the bank was on the low side.  Perhaps some of the generally high diversity of the St. Johns River springs is related to their high conductivity (a measure of ion concentrations in the water, kind of like the freshwater version of salinity).  The conductivity of five of the nine St. Johns River springs that I surveyed was over 1000 micromhos/cm (www.sjrwmd.gov) as compared to 100-500 micromhos/cm for the other springs on the St. Johns River, the Suwannee River springs, and the Santa Fe springs.  The dissolved oxygen concentrations also were quite high compared to many Florida springs (~5 mg/L); the high dissolved oxygen also could contribute to the high diversity.

Above the water, the algae and moving sediment were not always obvious, so it was easy to get lost in a lovely paddle.  Surprisingly, I particularly enjoyed photographing the buoys, which I thought looked like large, red crayons. 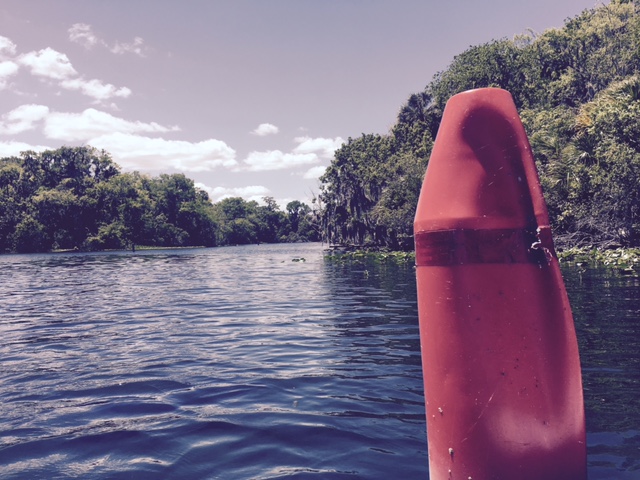 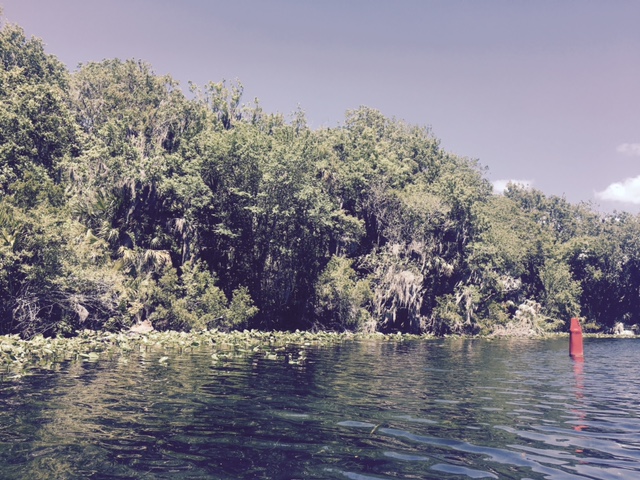